For a brief while in my life I was a very bad salesman.

I had the energy. I had the intelligence. I was creative. I never took “no” for an answer. I was always closing….

I just couldn’t read people for crap. So I sucked at sales.

I’m at one of the first Consumer Electronic Trade shows in Las Vegas. I’m trying to sell advertising in a computer magazine I founded in the early 80s. I’m pitching a marketing manager of a PC company and desperately want her to buy an ad. Coincidentally, I found her very attractive.

I’m selling my heart out. But her eyes are wandering…

Suddenly, she leans in and says quietly, “You know I’ve always found sales is more about personal connection than all your bullet points.”

She casually goes on, “What do you say we spend some time together and discuss this over…,” breathily, “breakfast…?”

Ok. Say what? It’s around 3 in the afternoon.

I think for a moment.

“Um, okay. What time do you usually have breakfast?” Pretty sure I stammered…

Her eyes got wide.

“What is wrong with you.” And with that, she turned on her heel. And strode off.

I talk with my VP of sales later. I couldn’t figure out how I missed the sale. She was so into me…

“You idiot.” He’s rolling his eyes. “We needed that sale,” he says.

“She wanted to sleep with you, you fool.” Pauses dramatically. Stares into my eyes. “It’s a TRADE SHOW, right? 99% of corporate staff here just want to get laid without any complications. How in hell could you not have gotten that?”

Know what I REALLY hate about talking to Neurotypical humans?

Their whole f’n “theory of mind.”

External physical signs. They are CONVINCED, beyond all my verbal or written argument, that the height of my eyebrows or some obscure crinkle of my lips more accurately portrays my inner being than…

That because — between my face blindness and autistic inability to interpret these micro-gestures as social speech — I must therefore have no understanding that they contain a mind separate from theirs.

Royally pisses me off.

Gimme a moment to compose myself.

I feel a pre-meltdown rant coming on…

I’ve been obsessively reflecting on the major events of my life for pushing 3 years now… Since Autism Spectrum Disorder, Level 1 diagnosis. After 63 years of not having a clue what was going on in my f’ed up life.

“They,” all the experts, say something like 80% of human speech is non-verbal. It’s a collection of instinctual mammalian grunts & gestures. AND human culturally-specific adaptations of them.

Am I human? I don’t speak, read, or reliably translate “social”… I’d say the jury is still out on if I actually belong to your species. But…

Bottom line, I’m not capable of understanding 80% of what you “say” to me.

I’m just winging it most of the time, making my best guess. Trying to hide the fact that, by your definition, I do not possess a shred of what passes for common knowledge amongst your species.

That doesn’t make me stupid. I KNOW you have a mind. And am painfully aware it’s different than mine.

Quick Aside: Humans refer to themselves as social animals. I beg to differ… They’re much more. Bees are also “social.” But primates have little in common with flying, hive insects. Humans are above all cultural animals… preserving knowledge they pass down from generation to generation in a variety of ways. But I digress…

The gulf between humans and me… especially when gathered in groups… was awful for me for a very, very long time.

I just didn’t know it. As I point out from time to time, I was born before autism was invented. And lived in a world for nearly 30 years that wasn’t aware that autism existed…

It was no more their fault that they didn’t know… than it was mine.

And over time, I’ve only gradually become aware just how much I used anger to cover up my experience of autism… As in lashing out at others before my full meltdowns or shutdowns set in just to distract or deflect folks from how dysfunctional I could be….

As I began to understand I was autistic, and with the support of my non-autistic 3rd wife, it got much awfuller… For a time. As I noticed how often I didn’t understand what was happening around me, how often I had meltdowns or rages, how often I misread social cues, became more aware of the effects on others….

But the real kicker?

The fact is I’m pretty alexithymic… that is, unaware of my feelings, motivations, and such internal states in the moment they happen. They only become clear when I’m alone and have time to I review the memories of my speech and behavior… after the fact. Sometimes weeks, months, years after the fact.

I rarely have a conscious agenda when I speak to you. I’m rarely secretly angling for some secret response. I’m usually not asking questions to talk you into some hidden goal of mine…

I’m usually just gathering information… to know what is going on.

And when I DO have an agenda? It’s usually painfully obvious! You have no idea how bad a poker player I am…. 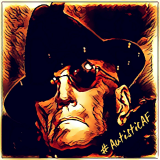